“Feel, look, tilt”. With these wellknown instructions, you can distinguish between genuine and counterfeit euro banknotes.

Counterfeiting banknotes is an old and widespread crime. Harsh penalties and banknote security features have been employed in an effort to prevent counterfeiting. In this exhibition, we tell the history of Finnish banknote counterfeits and the measures taken to combat counterfeiting during the euro period.

You can also help in tracking counterfeits! 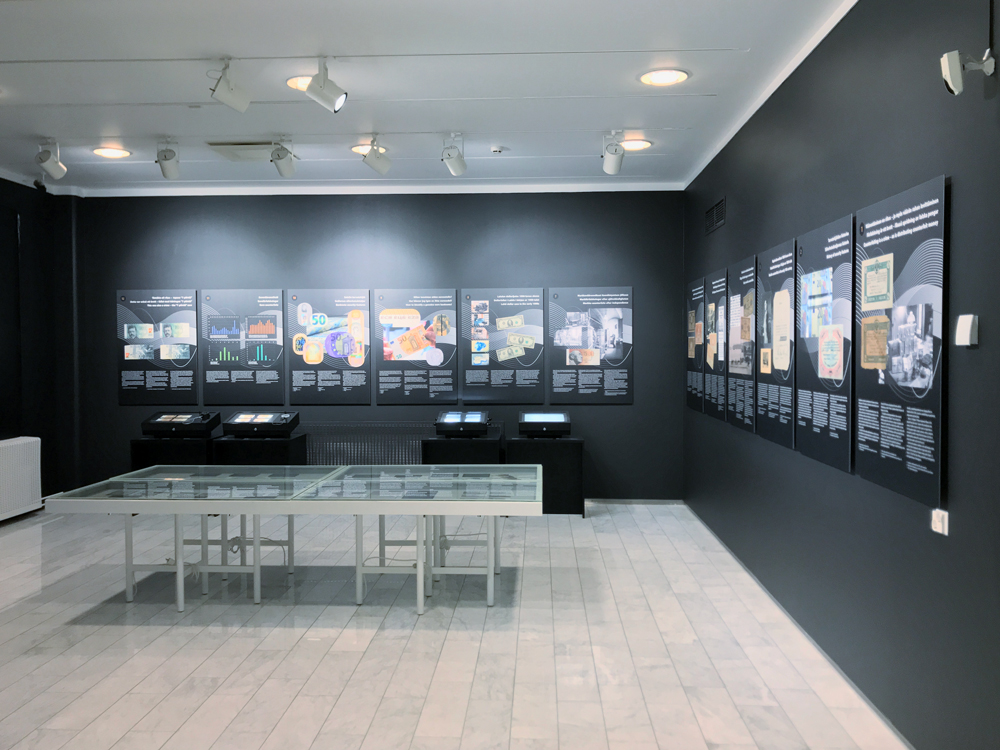 Counterfeiting is a crime – as is distributing counterfeit money

Formally, counterfeiting banknotes was a hanging offence in Finland until the 1870s. In practice, counterfeiting was punished by imprisonment and hard labour.
Section 1 of Chapter 37 Means of payment offences of the present Penal Code states: “A person who manufactures false money or falsifies money in order to pass it as legal tender or for this purpose imports, exports, procures, receives, transports or transfers to another money that he/she knows to be false or falsified shall be sentenced for counterfeiting to imprisonment for at least four months and at most four years.”
A person who prepares or produces, even with humorous intent, an image that is deceptively similar to legal tender shall be sentenced for circulation of imitation money under Chapter 37, Section 7 of the Penal Code. Money counterfeits are investigated by the National Bureau of Investigation. 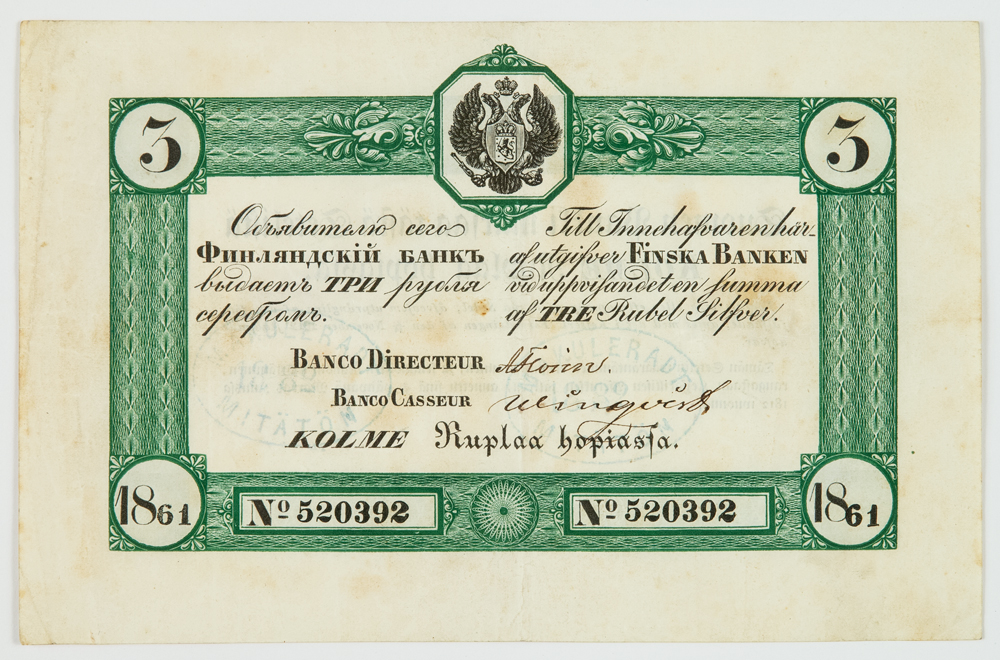 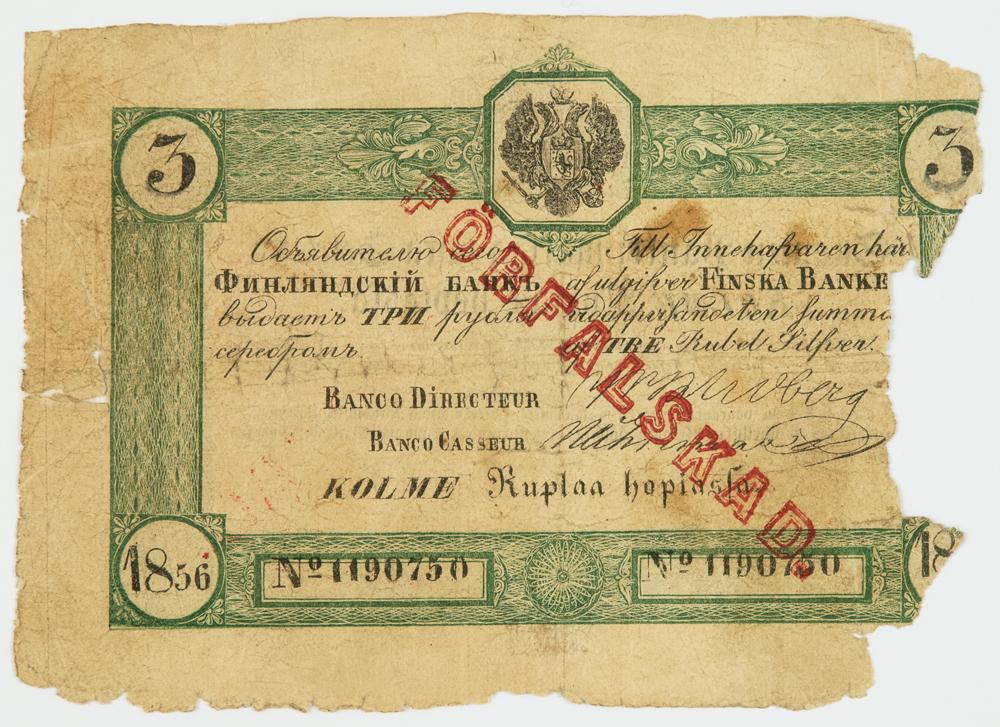 A genuine 3 rubel banknote from 1861, and a counterfeit.

Various holograms, special inks, features visible in ultraviolet light and infrared light as well as other non-copyable elements are basic features of euro banknotes.
Security features make money counterfeiting more difficult. Some security features can be seen by the public. Some, on the other hand, can only be seen by money handling professionals using special equipment.
The oldest security features are special banknote paper and a watermark, which was used in Finland as far back as the 1870s. Fine print work, banknote identification with serial numbers, and signatures are old security features that are visible to the public. Later, security thread, security fibres and complex patterns began to be used in printing. 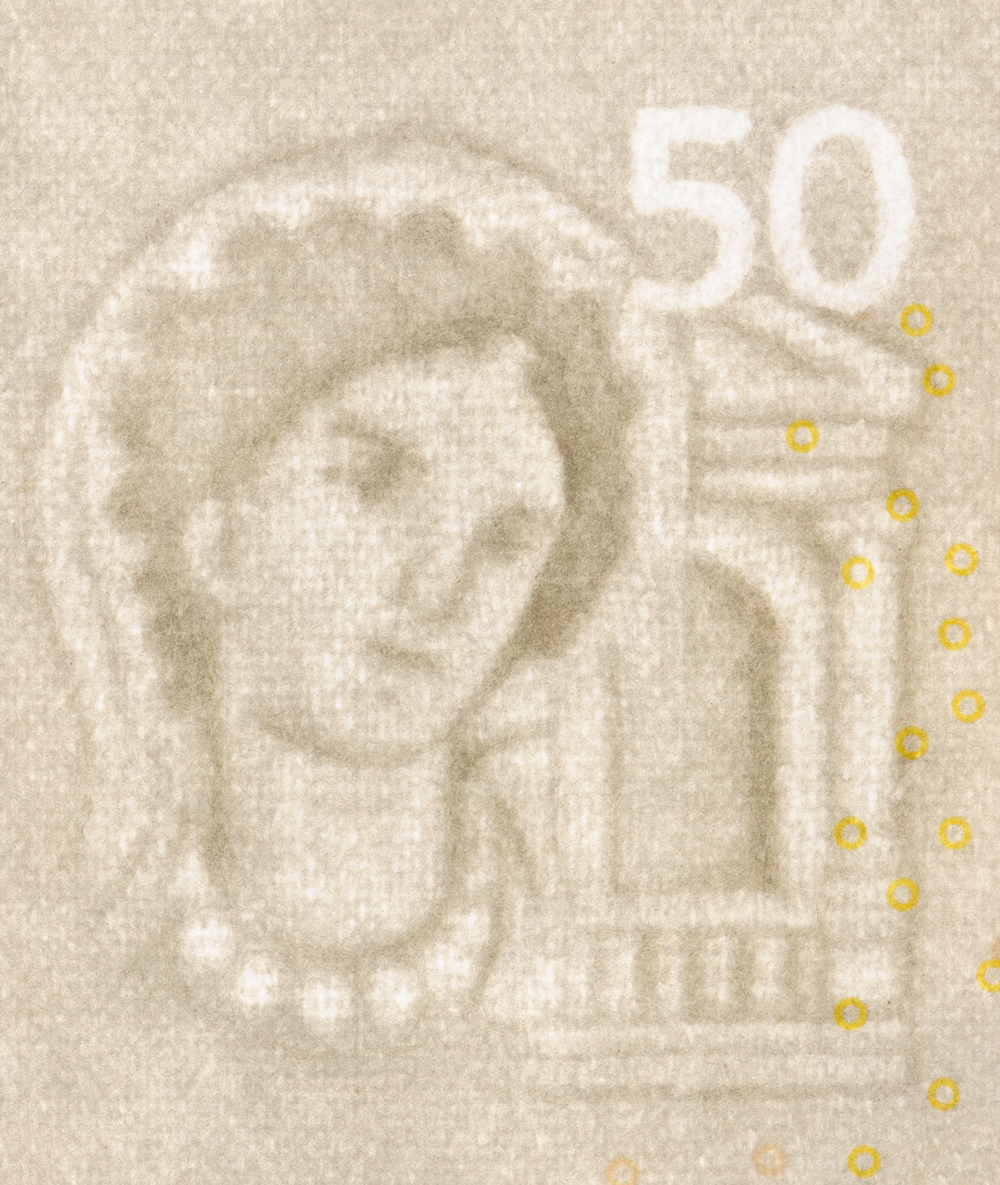 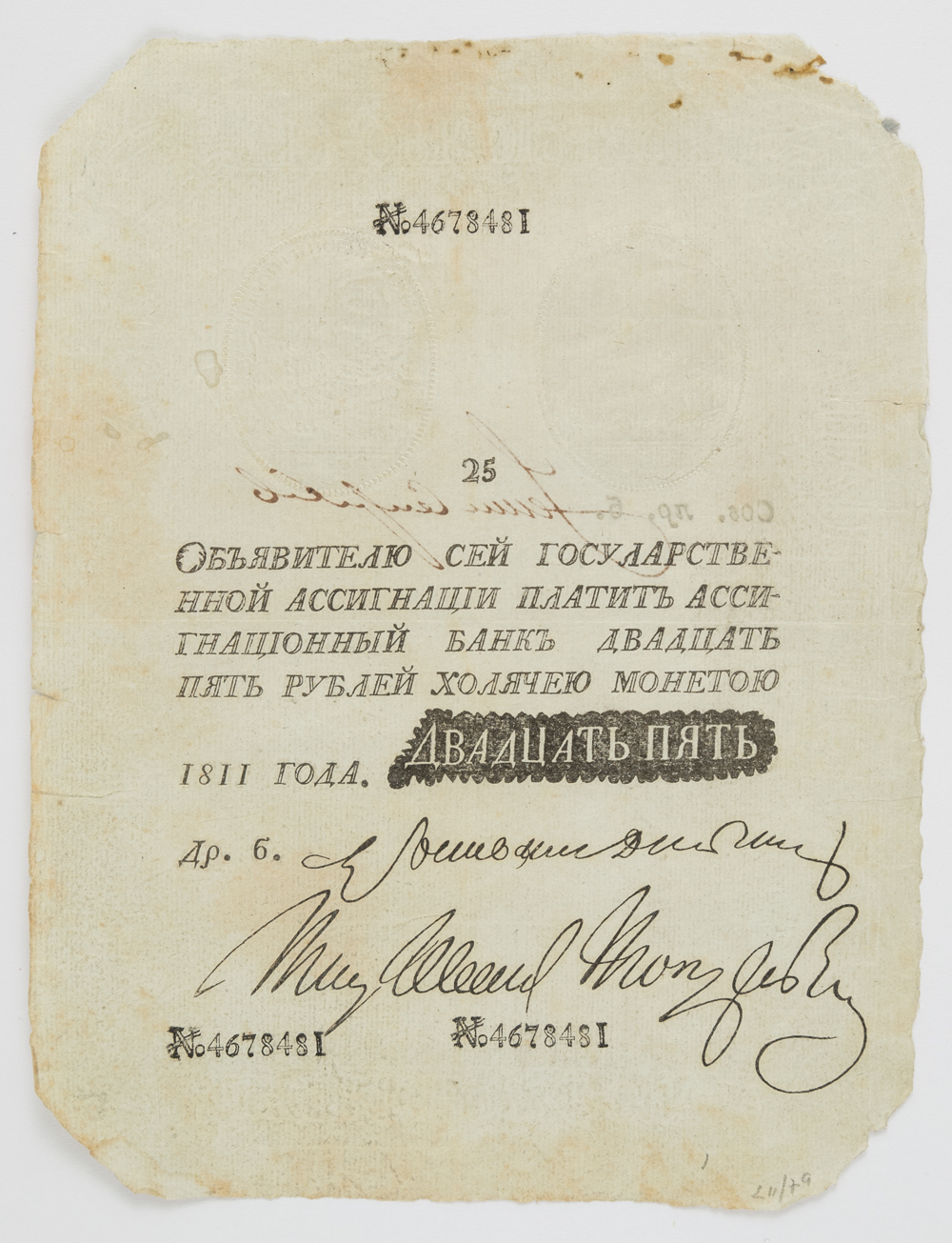 Finland gained its own currency, the markka, in 1860. The first high quality markka banknote counterfeits were found in 1867. The case was widely reported in the press, which apparently stopped the distribution of the counterfeits.
The most extensive case of counterfeiting in the 19th century was uncovered in 1881, when around one hundred counterfeit 10 markka banknotes were found. The perpetrators were not apprehended. The bank decided to replace the 1878 series 10 markka banknote with a new type.
Counterfeits of the new 1882 series 10 markka banknote soon appeared, however. The case led to discussion in the Parliamentary Supervisory Council about improving banknote security, and the banknotes were renewed once again.
Counterfeits were again uncovered of the 1897–1898 banknote series, even though efforts had been made to combat
counterfeiting by technical means. Unfortunately, the new antiphotostatic printing ink, aimed at “preventing counterfeiting”, rather facilitated this, because mirror images could be made of wet banknotes by pressing them. 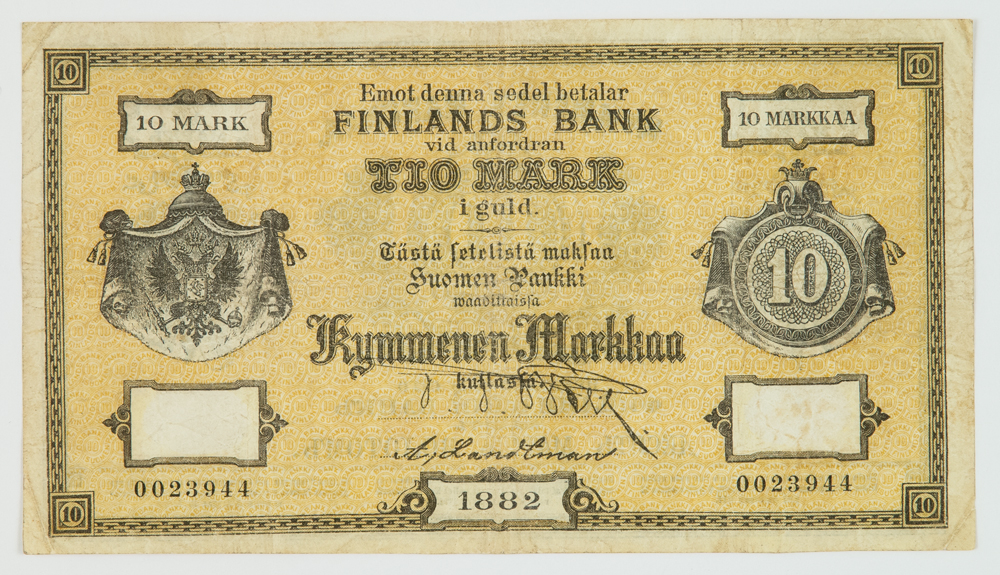 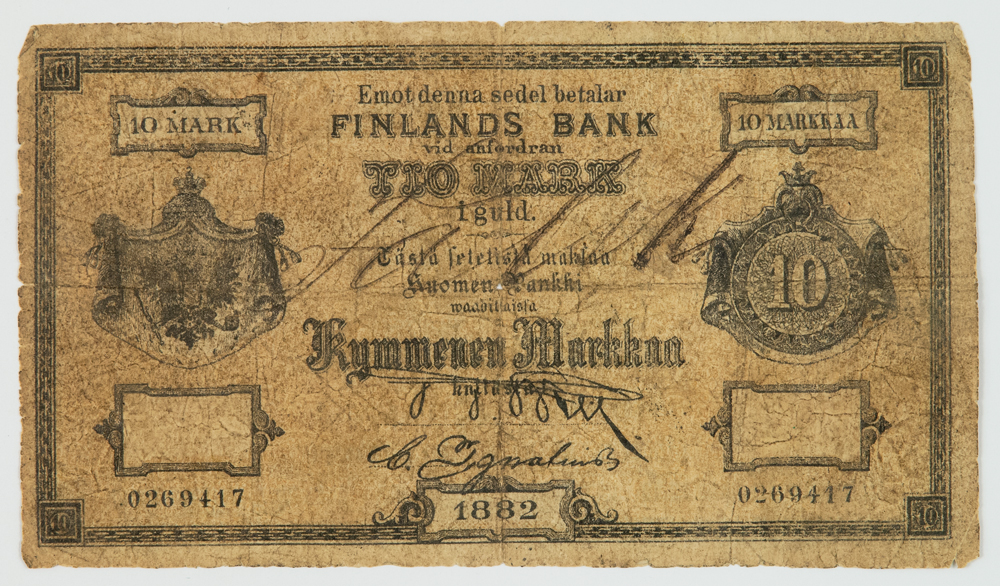 A genuine 10 markka banknote from 1882, and a counterfeit.

One of Finland’s best known instances of counterfeiting is the 1909 series counterfeiting case, which came to light in 1916.
Counterfeiters were caught. They succeeded in producing high quality replicas of the 20 markka banknote, but proved to be amateurs when it came to distributing them. The perpetrators only managed to distribute 1,121 of the counterfeit notes.
Their arrest was aided by the Bank of Finland’s rapid response and the reporting of the counterfeit banknotes’ identifying features in the press. The counterfeit banknotes were distinguished from the genuine banknotes by the shape of the Mercury staff in the bottom left corner. The counterfeits featured half of a staff and the genuine notes a whole staff.
Of the perpetrators, Johan Klingsten had studied photographic plate making and colour tinting. Mikael Forsberg was a
photographer and a printing plate expert. Heikki Juho Kirmanen worked in administrative positions. They were sentenced to 7–8 years’ imprisonment with hard labour. 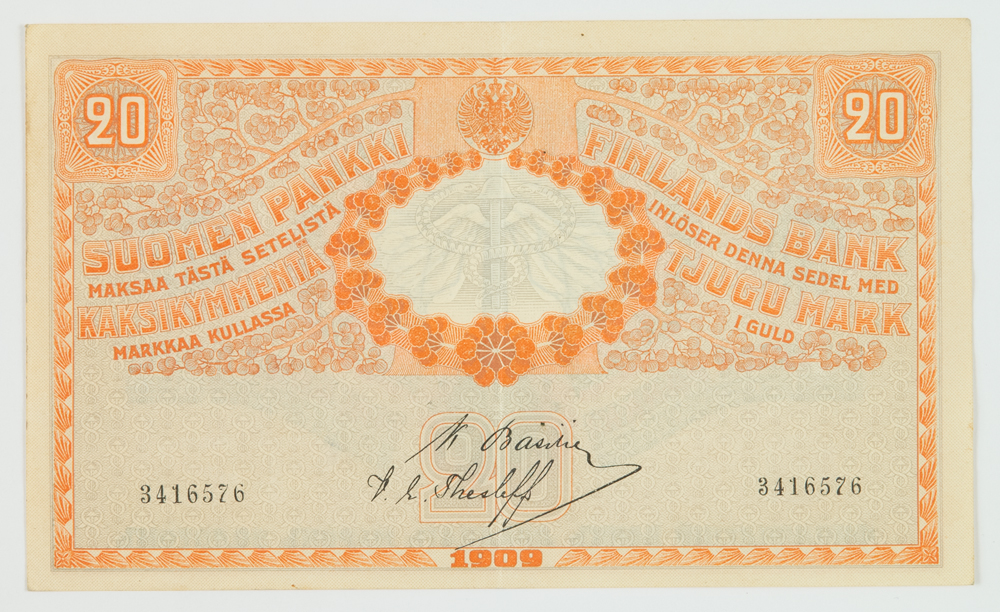 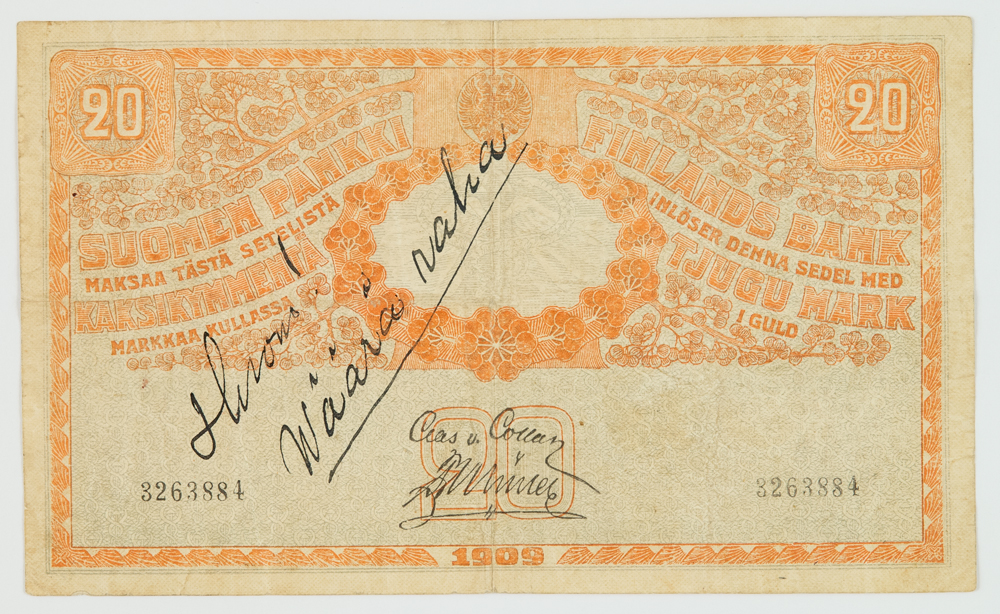 A genuine 20 markka banknote from 1909, and a counterfeit.

During the Civil War, the Reds occupied the Bank of Finland’s head office and banknote printing works. The Reds printed
banknotes worth 77 million markka. They were soon declared to be illegal, but they differed from genuine banknotes only
in terms of their serial numbers, which people widely tried to “correct” so that the counterfeit banknotes were accepted. The first replacement series of banknotes was printed with the text “Litt. A”, but these were also easy to counterfeit. Due to the counterfeits, it was decided to change the colours of the banknotes. The new banknotes were also marked with the text “Sarja II” (Series II). Ultimately, five different versions of the 1909 series of banknotes were in circulation, four of which were legal and one – the banknotes printed by the Reds – had been declared counterfeit. 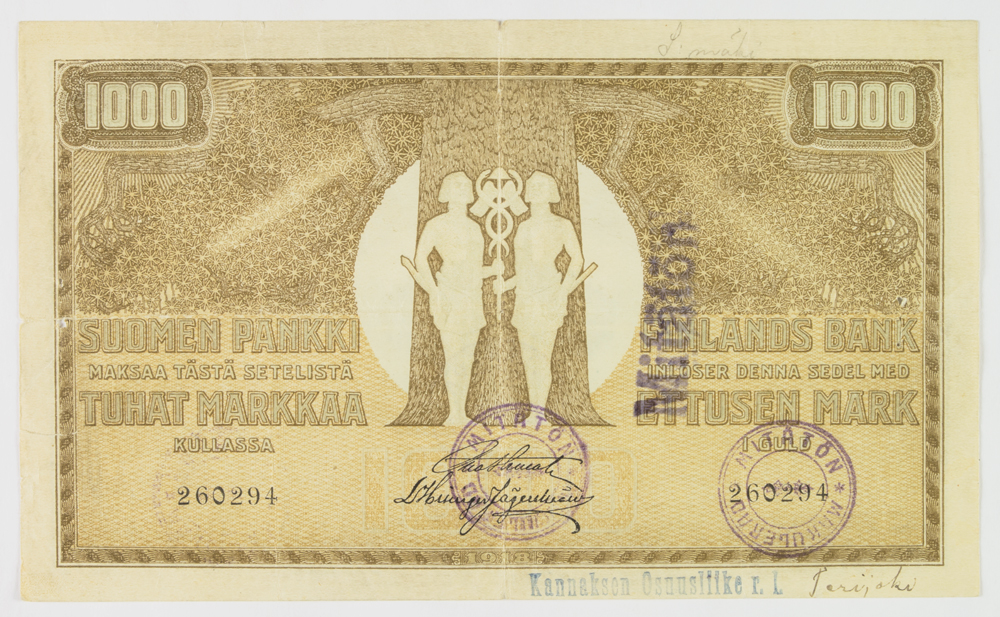 The aftermath of the Civil War also included a counterfeit 1,000 markka banknote, which emerged in St. Petersburg at the end of 1923. 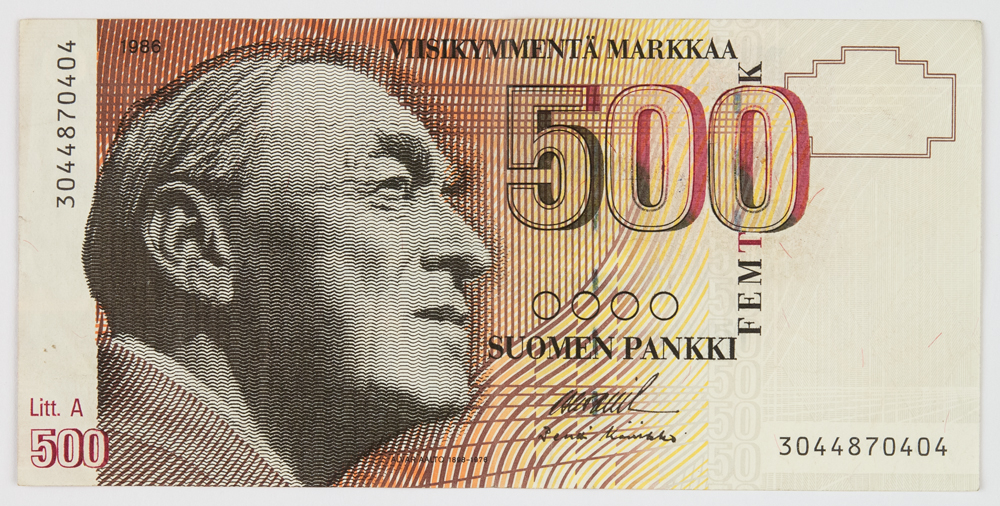 50 markka banknote with an extra zero.

Skilfully counterfeited US dollars were uncovered in Finland. On five different occasions, the counterfeiters printed dollars with a total nominal value of 9 million markka, and were also preparing further counterfeits worth approximately 14 million markka. Just under twenty 50 and 100 dollar banknotes ended up in the banking system. The crimes were committed in 1994–1997. The same perpetrators also made counterfeit revenue stamps, which were used for tax evasion.
Lahti District Court imposed unconditional imprisonment sentences in the dollar counterfeiting case in 1997. The three main perpetrators received 6-year sentences.

How to identify a genuine euro banknote?

Feel: The embossed printing feels rough, because the ink is raised on the surface of the paper. The best way to feel the print is at the series of lines on the left and right edges of the banknotes. Euro banknotes only have embossed printing on the front side of the banknotes.
Look: When held against the light, a watermark, security thread and portrait window are visible in the hologram stripe. The security thread in the euro banknotes is embedded inside the paper, and against the light it is visible as a dark line in which the euro symbol € and the value of the banknote can be read.
Tilt: By tilting the banknote, the banknote value and the structures of the main image can be seen in the hologram stripe on the front side of the banknote. The denomination number in the left bottom corner shows a scrolling crossbar, and the colour changes from blue to green.

Money handling professionals can check security features using special equipment, such as magnifying glasses, ultraviolet light and infrared viewing devices.
Euro banknotes feature microprinting, for example in the star pattern on the front side and in the bridge structures on the reverse side. A magnifying glass is usually needed to read this. There are two different types of microtext: positive with dark text on a light background, and negative with light text on a dark background.
Special lights: special inks, to which special features can be added, are used banknote production. By changing the wavelength of light from the visible light spectrum to ultraviolet and infrared, additional security features can be made to appear. 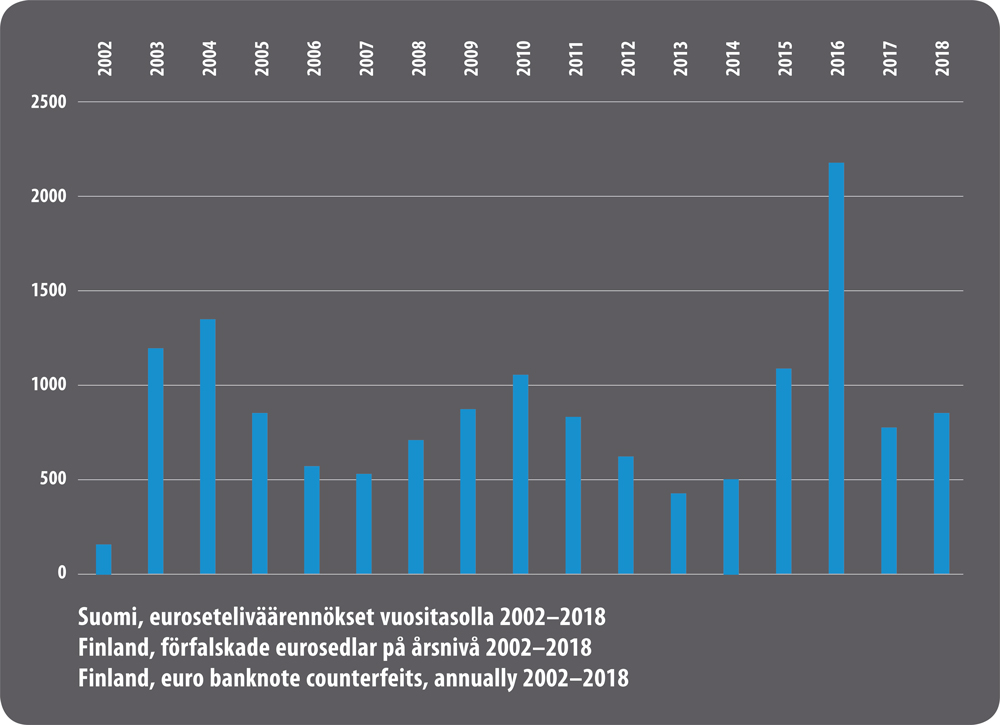 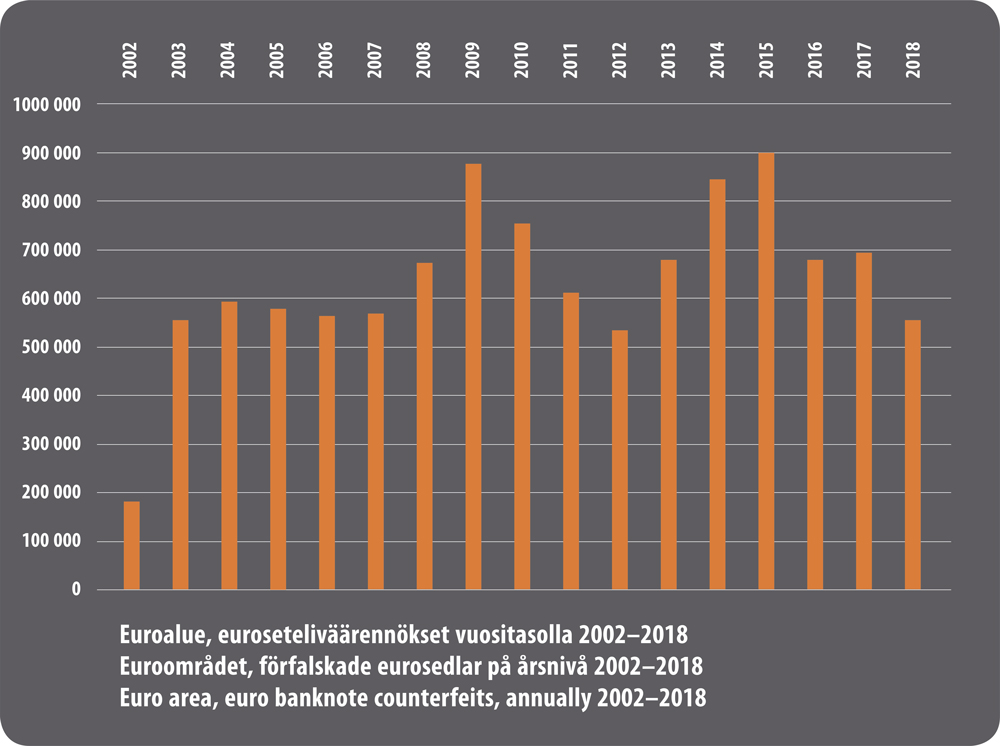 On 2 February 1995, the magazine 7 päivää (7 days) published on its cover a separate double-sided 100 markka banknote that almost looked like the real thing. In the picture, the 7 päivää emblem was printed at the watermark location. Around 140,000 copies of the magazine were printed.
Soon after the magazine’s publication, there were a number of cases throughout Finland where the banknote had been cut out of the magazine and used or attempted to be used as a means of payment, with the magazine emblem removed or concealed.
Afterwards, a number of people were convicted on counterfeiting in various parts of Finland. The Court of Appeal imposed fines on the editor-in-chief and marketing director for distributing counterfeit money.